What Is Wheaten Cornflour? 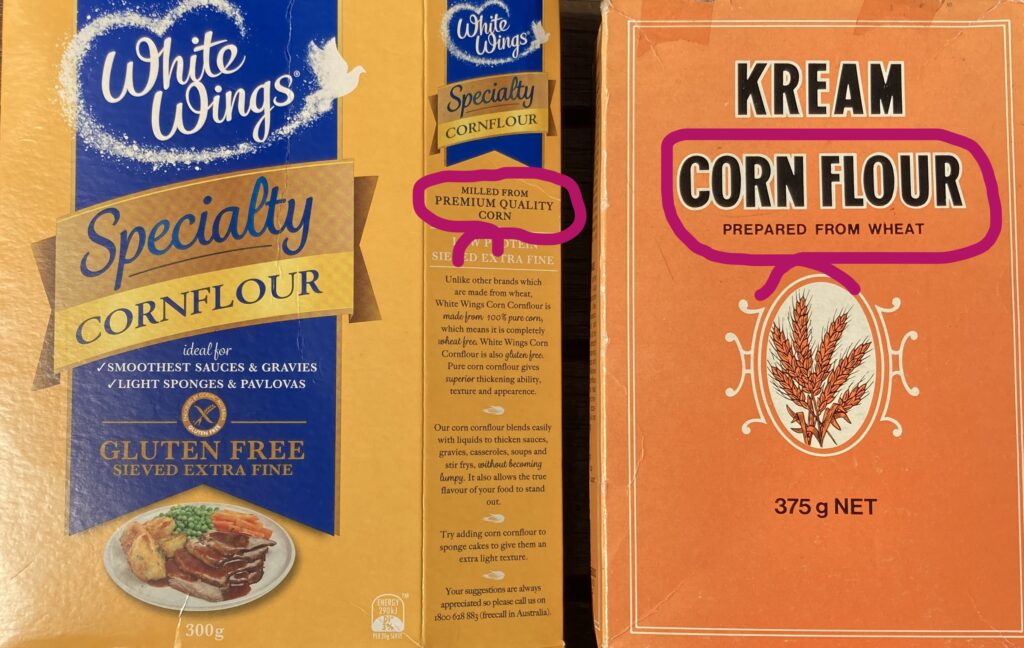 Have you seen these mixed terms and scratched your head trying to figure out what they mean?

Is it NOT starch made from corn that somehow wound up getting contaminated with gluten.

Take the time to read the explanation below to fully understand this term and how starches are labelled on foods to indicate if they contain gluten or not.….

How did we get 2 names… maize and corn … for the one grain?

Corn also called Maize, initially grew in Central & South America before spreading to the rest of the world.  The Indigenous Tahino people of pre-Columbian America called this food crop ‘mahiz’, from their now extinct language. It is believed that ‘mahiz’ went back to Europe with Columbus and spread through the trade routes of Europe, Africa and Asia during the 1500-1600’s.

Korn was a Norse name for grain

When I visited Manchester in England several years ago, I saw an historic building called ‘The Corn Exchange’. In years gone by it was called the Corn and Produce Exchange and the farmers in that region would bring their ‘corn’ crop (wheat, barley etc) to the Corn Exchange for weighing, payment and on selling.

Hence, when ‘mahiz’ was introduced to Europe in the 1500’s… korn… this loose term for grains, was applied to it too. It became known as ‘Indian corn’. The prefix ‘Indian’ was later dropped and in modern times, ‘corn’, the historical term for any grain, has since come to refer specifically to ‘maize’. Today the terms maize and corn are often used interchangeably with maize being more commonly used in the United States.

‘Cornflour’ describes the starch portion of any grain

The colloquial nature of this general term for any grain is still seen today in our food industry when referring to starches. All grains …wheat, maize/corn, barley, rye, rice etc… can be processed to make starch. The initial refining steps remove the protein, and the remaining starch is called ‘cornflour’. Just like the old Norse term Korn, this term ‘cornflour’ describes the starch portion of any grain.  In our supermarkets today we mostly buy ‘cornflour’ that is derived from wheat or maize/corn.

There is no legislation about spelling. You sometimes see it spelled as one word ‘cornflour’ and sometimes as two words ‘corn flour’. That could side track me into another story…..for another blogg.

Australia is by large a wheat producing nation so ‘cornflour’ (or starch) derived from wheat is very common here. This will be the cheapest starch usually, for Australian food producers to purchase to include as an ingredient in their product. The United States grows the greatest amount of maize in the world, hence ‘cornflour’ (or starch) derived from corn/maize is commonplace and is the cheapest starch for US food manufacturers to purchase.

How do you know if it has gluten?

All these words below tell you if the starch is gluten free.

These 3 words below could mean any gluten free grain was used to derive that starch. The manufacturer only has to tell you the grain source, if the starch came from a gluten containing grain.

These 4 words tell you specifically that maize/corn was definitely the route grain used and it is of course gluten free. When the word starch is paired with corn, it is specific to maize.

All these words below tell you if the starch is not gluten-free.

Manufacturers need to tell you the route grain the starch is derived from, IF it is a gluten-containing grain. Most of the time a starch derived from a gluten grain will have small amounts of detectable gluten. (exceptions to follow).

Below are 6 options a manufacturer can use to tell you the starch was derived from wheat.

If the wheat starch has been extremely well washed, such that the gluten is much more reduced than the regularly produced wheat starch, you may see ingredient names along these lines below, used on a product.

If the starch came from barley, rye, khorasan or any other gluten containing grain, then all examples shown above for wheat would apply, and the manufacturer needs to label which grain it came from, eg starch (barley).  Manufacturers have to identify gluten grain sourced starches.

Labelling starch in a nut shell

Starch can come from many different grains and also from non-grain sources such as potatoes, arrowroot and tapioca. Remember that Manufacturers don’t have to name the sources that are naturally gluten free, like potato, rice or corn. So, if just “cornflour” is listed, the absence of telling you where it came from, indicates it was from a gluten free source. Manufacturers only have to give you more information if it came from a gluten-containing grain, such as “cornflour (wheat)”.